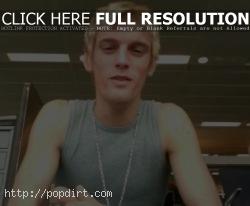 Aaron Carter checked in from an airport with a video clip on his MySpace TV channel, where he talked about participating in a charity celebrity basketball game for the Hollywood Knights. Their trek started out in Minneapolis before heading to Reykjavik, Iceland, and then to Bergen, Norway.

“We are in the airport right now. Northwest. I am going to be participating in the celebrity charity basketball game, Hollywood Knights, in Bergen. I hope everyone’s excited because I’m coming there,” Aaron said.

February 21, 2008 – Kimble County Sheriff Mike Chapman tells People magazine that 20-year-old Aaron Carter was arrested for possession of marijuana after the singer was pulled over in Junction, Texas for speeding on Thursday. Carter is currently in jail awaiting a Friday morning appearance before a magistrate. Carter was stopped alone in his Cadillac Escalade and was carrying less than 2 ounces of pot.