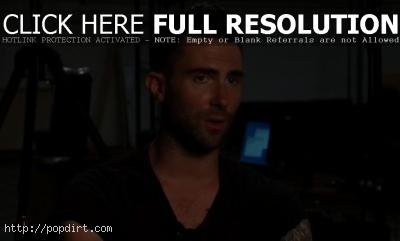 “Aside from the fact that it’s cool to be in a video game, it’s also exciting to be relevant enough, or to be thought of as someone who could be on this game,” Adam said, adding that it was “pretty cool” doing the motion capture work for the game. “They had me in this groovy suit that made me look a little bit like a dorky super hero, having all these silver balls on me. It was really amazing actually. It was one of the more unique things I’ve ever done in my life. I don’t know if I’ll ever have that feeling again.”

As for what’s different about Band Hero, Adam said, “Band Hero is great because they really diversify what you’re playing in the music and songs you can choose. I was kind of a rebellious little kid and I started branching out. I only liked ten bands, and then I started really branching out and getting into a lot of soul music and R&B that I’d never really listened to very much like Stevie Wonder and Marvin Gaye. So really I was a sponge for all these different kinds of music. I feel like that’s the best way to be. There’s beautiful music in every possible genre and category.”

As for how the music biz landscape has altered, Adam said, “As much as the music business is kind of falling apart, music is more present than it’s ever been. Things like Band Hero and Guitar Hero, just things that I’m seeing popping up more and more that weren’t around when I was a kid is really crazy. I love it. I love being a part of it, and I love how music is incorporated now with video games. It’s the only way to get music out there since the record business is a disaster.”

Check out the trailer where Adam talked about his experience helping make the game below.