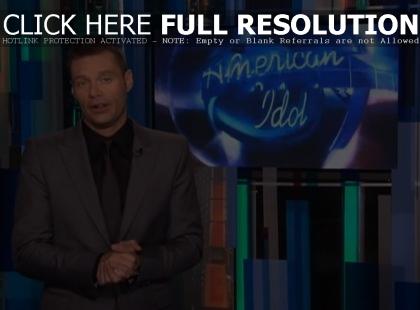 ‘American Idol’ has partnered with MySpace to provide online auditions from September 15th through October 6th. Hopefuls between the ages of 15 and 28 can submit an audition video at www.myspace.com/americanidol. Watch a message from ‘Idol’ host Ryan Seacrest about the news below.

September 4, 2010 – Kara Dioguardi issued a statement confirming she’s no longer going to be a judge on ‘American Idol’, though it was widely reported the songwriter was given the boot rather than leave on her own. Kara said:

I felt like I won the lottery when I joined American Idol two years ago, but I feel like now is the best time to leave Idol. I am very proud to have been associated with American Idol – it has truly been an amazing experience … I look forward to my next challenge, and want to thank everyone who has supported me. All the best to everyone on Season 10!

July 29, 2010 – Ellen DeGeneres issued a statement earlier today to announce she is exiting ‘American Idol’ after only one season, joining Simon Cowell who left the show last season to work on the American version of ‘The X Factor’. Ellen said:

A couple months ago, I let FOX and the “American Idol” producers know that this didn’t feel like the right fit for me. I told them I wouldn’t leave them in a bind and that I would hold off on doing anything until they were able to figure out where they wanted to take the panel next. It was a difficult decision to make, but my work schedule became more than I bargained for. I also realized this season that while I love discovering, supporting and nurturing young talent, it was hard for me to judge people and sometimes hurt their feelings. I loved the experience working on “Idol” and I am very grateful for the year I had. I am a huge fan of the show and will continue to be.