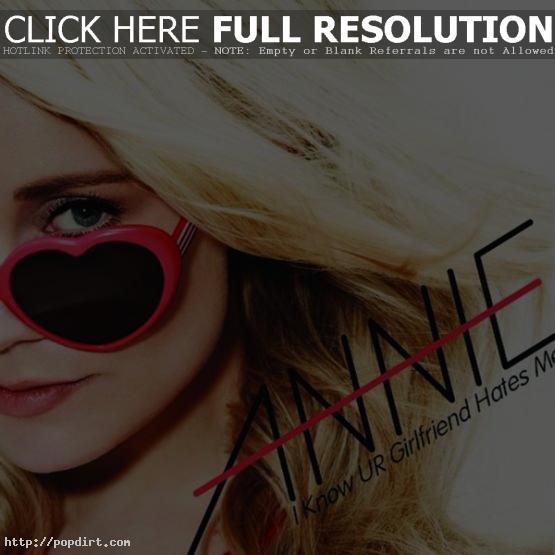 Annie checked in with fans on her blog at MySpace (@anniemusic) on Saturday (July 5), where the Norwegian pop star talked about the story behind her new single ‘I Know UR Girlfriend Hates Me’. “This was actually one of the first songs I wrote for this album,” she writes. “I had a period of time where I was listening a lot to Prince… and I had this idea about making a song where the drums and the guitar would be a little bit like ‘Kiss’. Of course it ended being nothing like Prince… but that’s where the inspiration came from. A bit snappy….and rude:-) I’m not gonna tell the whole story about the lyrics, because I like to keep a little bit to the imagination of the listeners… but it’s based on a true story. I have a friend of mine that is a very beautiful attractive, funny smart girl…. she’s always surrounded by loads of guys…. but one of the guys had a girlfriend that was not too happy with the situation… and rang her door saying ‘you better leave my boy alone girl… or I’ll break you’… I’ve been going through something similar myself, so I thought, hmm…. seems to me like a lot of people relate to situations like that…… I’ll write a song about it.”