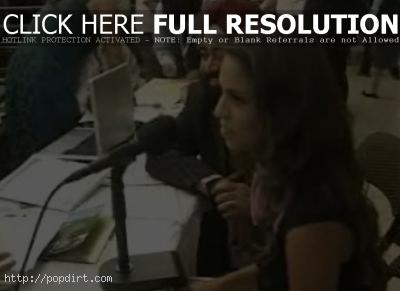 Antonella Barba took part in a radio interview with The Young Turks host Cenk Uygur from the Democratic National Convention in Denver, Colorado.

The ‘American Idol’ season six semi-finalist talked about still not getting through all the MySpace and Facebook messages that have been sent to her by fans since her infamous run on the hit FOX show, and her work with ElectionMall Technologies to encourage young people to vote.

Asked about how she liked growing up in New Jersey, Barba said, “I loved it. My town was a little town on the beach, and I’m obsessed with the beach, so it’s great for me.”

When asked if she was the hottest girl in her high school, she said, “No. Can I tell you the high school that I went to, it was Red Bank Catholic, and it’s known for just gorgeous girls. Walking down the hallway is like walking down a runway. It’s unbelievable.”

On her photo flap, she said, “It was blown out of proportion. The amazing thing about (‘Idol’) is unlike getting into the industry any other way, where you really have to work your way up, that show brings you straight from one place straight to another place, and you don’t even go through the transition, and you are suddenly in the public eye on a level you could never even imagine, so I mean of course it’s a lot of scrutiny and the media is all over that show. It’s the #1 show in the world I believe.”