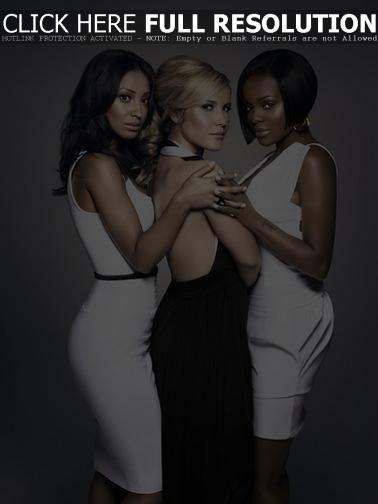 News of the World hears that the Sugababes are taking an extended hiatus following poor sales of their latest album ‘Catfights And Spotlights’. “They haven’t ruled out getting back together in a year but they’re officially on an indefinite extended break,” a source told Dan Wootton. “They want to say goodbye to their loyal fans with a farewell tour.”

“This Brits story has been taken way out of context,” Buchanan insisted, suggesting that the fans should have input on who wins “more so than people behind a desk making all the decisions.”

Amelle added that their comments were “more of a joking way we said it, it was very light-hearted.”

November 18, 2008 – The Mirror spoke with Sugababes at The Hospital club in London’s Covent Garden, where the pop trio talked about repeatedly being snubbed by the Brit Awards, despite a career that has seen the group sell 5.5 million albums, get six #1 singles, and a chance to visit British PM Gordon Brown. “I say this in the most humble way but when you think of pop bands the Sugababes are definitely up there,” Keisha Buchanan argued. “I’m proud that Gordon Brown is recognizing us, but why not the Brits? We’re British for God’s sake and we’ve done well. Surely we deserve an award after all the hard work we’ve done?”

Sugababes Discuss Their New Single ‘No Can Do’

November 16, 2008 – Sugababes spoke with ITN Music about their new single ‘No Can Do’, which Amelle Berrabah described as “a song about men who just treat you like poo poo.” As for the potential of the single facing off against ‘X Factor’ releases, Keisha Buchanan said, “To be honest with you, it’s always a competition anyway. But we just feel like we’ve already proven ourselves, and we don’t think we have to get involved with that kind of thing.” Watch the comments below.

November 13, 2008 – Pop trio Sugababes joined ‘X Factor’ contestants and ‘Gossip Girl’ star Chace Crawford along London’s famous Oxford Street for the big Christmas light switch-on. “It will be funny when we come here shopping after today and we look at the lights and go, ‘Oh, we switched them on’,” Heidi Range told ITN. “It’s almost like the start of Christmas for us, so it’s really good.” Watch the clip below.

One thought on “Are Sugababes Taking An “Indefinite Extended Break”?”