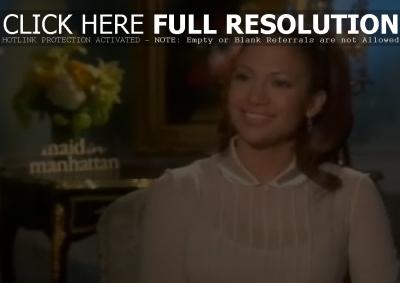 Ashanti chatted with Rolling Stone’s Matt Diehl about the rumor that she ghost-sung on Jennifer Lopez’s album. Ashanti said, “You are bad! You’re a bad guy!” When pressed for a real answer, she explained, “I demo-ed the vocals for her so she could hear it, not so they would be on the record. So I’ve actually been involved with four records in the Top Ten at the same time; everyone says three, but, technically, it’s four. At first, I was like, ‘Hold up, what’s going on?’ But it’s getting taken care of.”

May 18, 2002 – US Weekly profiled Jennifer Lopez’s cover shoot for the current issue of Elle magazine. The star listened to Latin music on a photo shoot set at Miami’s Oribe hair salon and South Beach. For lunch, J.Lo enjoyed Tabbouleh, chicken, and tiramisu.

May 18, 2002 – Yahoo! had a photo, since removed, of Jennifer Lopez being hugged by Oprah Winfrey after appearing on her talk show taped Wednesday and aired Friday. Lopez talked about her new marriage and gave a performance of her new single, ‘Alive’ (she didn’t lip-synch). J.Lo also talked about her new movie ‘Enough’, which opens in theaters next Friday.

One thought on “Ashanti Addresses ‘Ghost-Singing’ For Jennifer Lopez”