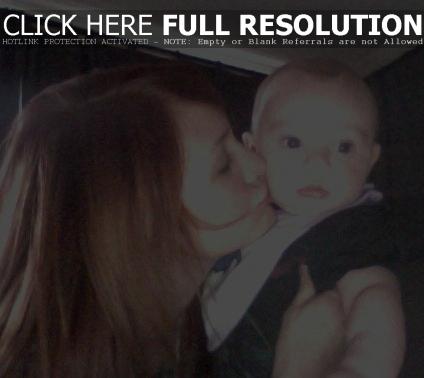 Ashlee Simpson posted a picture of her holding baby son Bronx Mowgli on Twitter (@ashsimpsonwentz). “I present you my little man and his adorable cheeks,” Ashlee writes.

March 30, 2009 – Pete Wentz spoke to Hollyscoop.com at the Nickelodeon Kids’ Choice Awards about a report his marriage to Ashlee Simpson was already in trouble. “I laugh out loud at them. I laugh at all of that stuff,” the Fall Out Boy bassist said. He jokingly added, “it’s like if someone wrote on the internet that John McCain was our president right now, it’s just not true.”

Ashlee Simpson And Pete Wentz Marriage On The Rocks?

March 26, 2009 – The New York Post hears that Ashlee Simpson and Pete Wentz’s brief marriage may be in trouble due to the Fall Out Boy bassist not adjusting to parenting life after the birth of their son Bronx last November. “Ashlee and Pete are on the rocks. He is going out all the time and she’s stuck at home. It’s just not working,” a source said.

But Pete got his wife to get on Twitter (@Petewentz) a few hours ago, sounding like things are going smoothly for the couple:

@ashsimpsonwentz finally welcome to the future. things are very different here. people drive cabs with no horses, fires light themselves…

@ashsimpsonwentz is my baby momma’s only official twitter. the others are fake. just like that blue version of he-man.