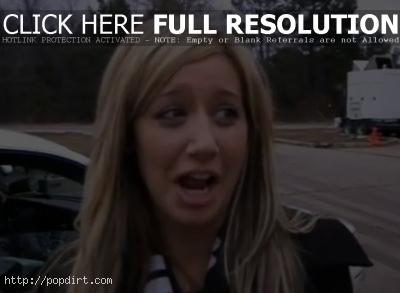 Ashley Tisdale was on the phone with Johnjay and Rich of 104.7 KISS FM on Phoenix on Wednesday (October 22) to discuss ‘High School Musical 3: Senior Year.’ She talked about how this big screen version differs from the prior two, comparisons to ‘Grease’, how the film’s prom is “very fantasy”, what life is like for her now that she’s famous, Johnjay’s sleep apnea due to a deviated septum and how he’s horrified about the potential pain – which Tisdale confirmed was painful.

“I talk about this so much though,” Tisdale said of her rhinoplasty, which was obviously a subject she didn’t want to discuss. “It’s just funny, because talk about it because you want to be honest with everybody and say why you do it, and it kind of goes against you. People don’t talk about it and they criticize you and I talk about it and I got criticized for it. I put it out there, I’ve explained everything I’ve been through.” Johnjay then made sure that he wasn’t trying to ambush her, but really wanted to know the process since he has to have the procedure done too. Ashley said her sister had it after breaking her nose and it’s different for people depending on the circumstances.