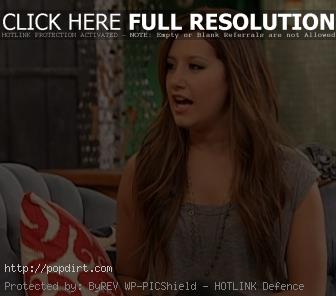 Ashley Tisdale visited ‘It’s On with Alexa Chung’ in New York City on Tuesday (July 28) as Alexa’s first repeat guest, talking about horseback riding, being fearful of monkeys, starring in the new Boys Like Girls music video, her new movie ‘Aliens In The Attic’, and her new album ‘Guilty Pleasure’.

On trying something new since her last appearance, Tisdale said, “I used to horseback ride, but I just did ‘Extreme Makeover: Home Edition’ in Missouri and I got back on the horse. It’s been a long time. I think I was ten when I was horseback riding. I was so nervous, and the horse was kind of spooked by all of the trailers and everything out there, so I was just like let’s go over (away).”

On filming ‘Aliens in the Attic’, she said, “It was a lot of fun. It was different because there was a lot of CGI and I never had done anything like that, so it was cool. It was challenging. It was a big action comedy. We had Kevin Nealon and we couldn’t keep a straight face the entire time.”

Watch it at MTV.com.