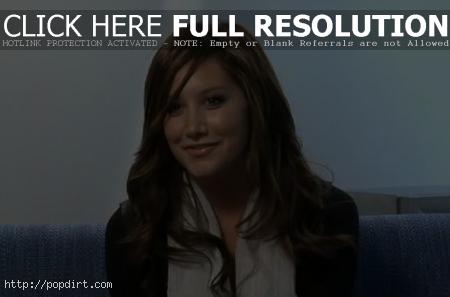 The MySpace Music Feed spoke with Ashley Tisdale about her new album ‘Guilty Pleasure’. The 24-year-old explained the story behind the album title, how she took a slightly darker turn compared to her first album, not trying to run away from ‘High School Musical’ but releasing something reflecting who she is as a person, and going back to brunette after five years being blonde.

“I’m originally a brunette, so I feel like I’m back to myself,” Ashley said about her current hair color. “I can’t say, the blonde and brunette, I think both are amazing and great, but I feel as a brunette I have this whole new attitude and feel myself and the fans will get to know me in a different way in how they see me. I was really inspired because I was blonde for so long and I really wanted to go back to who I am and be able to show that.”

Talking about her favorite fashion trend, Ashley said, “Probably scarfs. I’m wearing one right now. I love scarfs. I have tons of them and I think they go with everything. Sweats, skirts, jeans, it just dresses it up.”

Ashley laughed with some embarrassment when revealing, “My first concert was a Hanson concert. Yeah, I was like in love with Zac Hanson.”