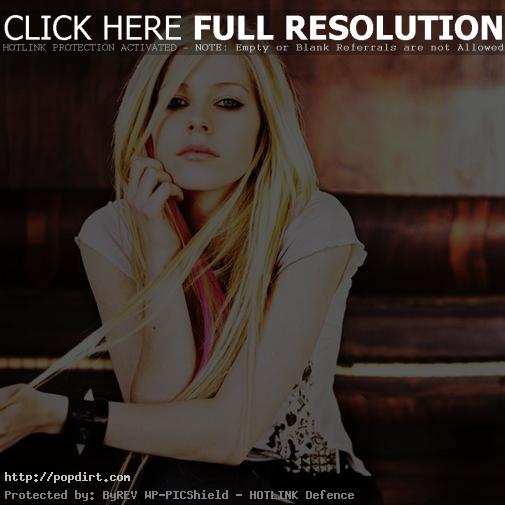 Avril Lavigne is set to debut her new clothing line Abbey Dawn, named after the nickname her dad calls her, at Kohl’s stores nationwide in July. The singer told UsMagazine.com: “It’s rock glam: fun, colorful, young and edgy. Everything is fit to be sexy and flattering.” Avril’s husband Deryck Whibley of Sum 41 has bene impressed with the line that includes hoodies, jeans and tees in bright colors and skull and zebra patterns. “He’s excited,” she said. “He likes everything I like!”

March 6, 2008 – ‘Access Hollywood’ caught up with Avril as the singer prepared to kick off her new tour, and Deryck Whibley’s hubby was vague when asked if she was pregnant. “I don’t know, you’ll have to ask my reps… Maybe.” She then showed off her drumming skills on her pink sparkle drum kit. Watch the segment below.

January 22, 2008 – Avril called in to KIIS FM in Los Angeles on Tuesday (January 22) while in bed and sang her pal Britney Spears’ single ‘Gimme More’. Lavigne was promoting her upcoming ‘Best Damn Tour’, and said of the show, “This is the first time I’m taking on a big production and I’m working on all parts of the production and design and I just want it to look good to the fans and have a great experience for them. I’m putting a lot into this and taking it to the next level. It’s going to be bright and video and lighting. A different kind of stage and more dynamic.”

Lavigne also talked about her amazing support in Japan, how she’s been out and about more than usual in Los Angeles lately, running into Ryan at Les Deux, the pregnancy rumor that’s not true, and her opening act Boys Like Girls.

One thought on “Avril Lavigne Excited About Clothing Line”