Avril Lavigne says after her hit debut album in 2002, she read that she was supposedly mad at her fans for dressing like her, she tells Newsweek. “They quoted Hilary Duff saying, ‘Avril needs to appreciate her fans more and blah, blah, blah, blah.’ I’m like, excuse me? First off, it’s not even true. I never said that. And second, who the hell cares what she has to say about my fans? Whatever. Hilary Duff’s such a goody-goody, such a mommy’s girl.”

March 12, 2004 – Sessions@AOL interviewed with Avril Lavigne about her new album ‘Under My Skin’, which she says will be more dark and personal than her debut. Lavigne talked about her guitar playing, which will be featured more on her performances going forward. Lavigne also touched on her cover of ‘Fuel’, and the response she got from Metallica. Fellow Canadian Fefe Dobson gets comparisons to Lavigne, and she says they are friends. Asked who she’d like to play her in a movie, Lavigne picked Brittany Murphy. The end had her do a quick Q&A on one-word preferences, including Britney Spears or Christina Aguilera. Video of the interview has since been removed.

March 11, 2004 – An estimated 5,000 at the Somerset Collection in the Detroit suburb of Troy check out the Avril Lavigne Live and By Surprise tour stop on Tuesday (March 9). Billboard’s Gary Graff was in attendance and said, “Judging by the five new songs Lavigne performed, the album has the same crafted, melodic grounding as ‘Let Go’. There was an angsty, lost-love strain running through the punchy set opener ‘He Wasn’t’ and the anthemic ‘My Happy Ending’, boasted the swelling dynamic of a prototypical Nickelback song. ‘Take Me Away’ was another lyrical hand-wringer that swelled into a dramatic chorus, while ‘Nobody’s Home’, which Lavigne wrote with former Evanescence guitarist Ben Moody, had a torchy, darker feel.” 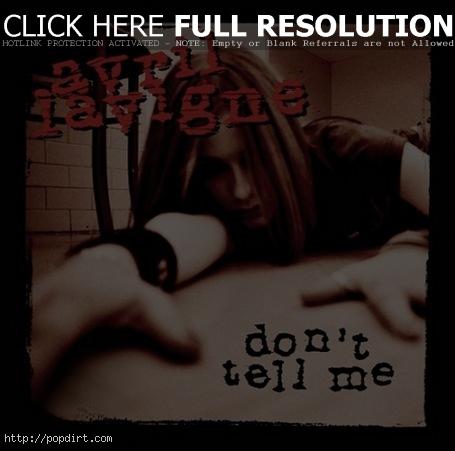 March 10, 2004 – Chris Dahlen of Pitchforkmedia.com reviewed Avril Lavigne’s new single ‘Don’t Tell Me’, giving it only half a star. He writes, “Avril’s songwriters try hard to make her ‘authentic’, to make you think this really is some girl in detention writing angry words on her sneakers. But the grown-ups are out of their depth on ‘Don’t Tell Me’, a cringeworthy song about how you shouldn’t let boys pressure you into sex.”

8 thoughts on “Avril Lavigne Fires Back At Hilary Duff”