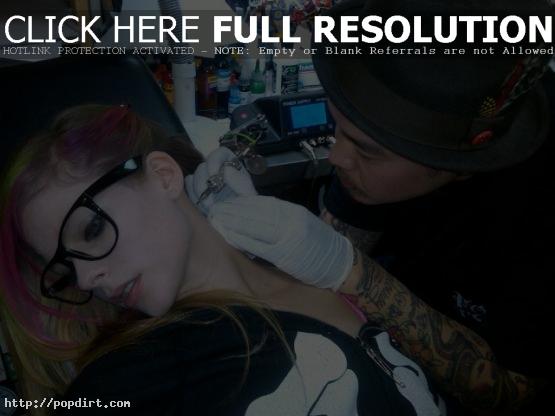 Avril Lavigne checked in with her Twitter followers (@AvrilLavigne) on Sunday (March 14) during and after getting a tattoo of a safety pin on her neck. The 26-year-old singer writes:

I’m getting a fu**ing neck tattoo

the point of twitter….. All of us being connected and in touch…… PS You all did it with me

What a great day with my girlfriends….. Hahah. Just being me… Girl time is always necessary. And I got a tattoo. Holy crap hahah

March 8, 2011 – Avril was videotaped handing out copies of her new CD ‘Goodbye Lullaby’, released today, to paparazzi in New York City before jumping in an awaiting SUV. Watch it below.

Behind The Scenes On ‘Today’ With Avril Lavigne

March 8, 2011 – ‘Today’ co-hosts Kathie Lee Gifford and Hoda Kotb chatted with Avril in the green room on Tuesday (March 8), who talked about being excited for the ‘Goodbye Lullaby’ album release today, and then did an impromptu performance of the her new single ‘What the Hell’. Watch it below.

One thought on “Avril Lavigne Gets A Safety Pin Tattoo”