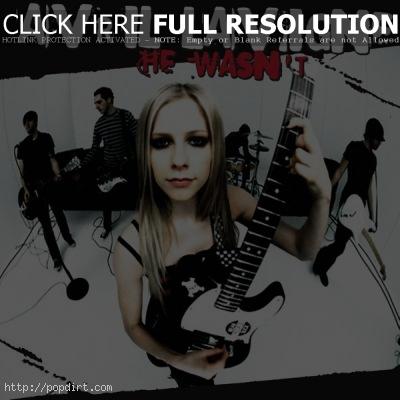 Avril Lavigne is out with the music video to her new single ‘He Wasn’t’, off the Canadian pop singer’s second album ‘Under My Skin’, out now on Arista Records. ‘He Wasn’t’ was written and produced by Avril Lavigne and Chantal Kreviazuk. Watch the clip below.

Avril Lavigne And Deryck Whibley Catch A Cab After Clubbing

January 8, 2005 – Lulop.de had video, since removed, of celebs at Mr. Chow, Koi, and Prey in Hollywood on Thursday (January 6), including Suge Knight lighting up a cigar and posing with fans, Avril and boyfriend Deryck of Sum 41 grabbing a cab, and Puddle of Mudd frontman Wes Scantlin signing an autograph.

January 5, 2005 – Contributed Anonymously: On January 29th, Avril, Sarah McLachlan, Barenaked Ladies, Chantal Kreviazuk and more will be playing a Tsunami Benefit concert at GM Place in Vancouver. The concert will be hosted by Rick Mercer and tickets go on sale starting on January 8th.

December 20, 2004 – Avril stopped by Fuse’s ‘Daily Download’ last week for an interview and a solo acoustic performance of ‘Nobody’s Home’. She talked about playing hockey, her video shoot for ‘He Wasn’t’ that resulted in her hair turning pink, and possible future movie plans.

Avril Lavigne’s Stink Over Being In The Pink

December 20, 2004 – The New York Post reports Avril had a tough week in the Big Apple last week during some photo shoots. The singer was doused in pink paint for a video shoot which wreaked havoc on her hair, forcing her hair to be died back to its natural color. The following shoot for Cosmopolitan found the Canadian in a nasty mood, demanding a closed set and forcing the crew to wait outside during each shot.

«Minnie Driver: I Can’t Shake My Butt Like Jennifer Lopez
A Gift For JC Chasez»