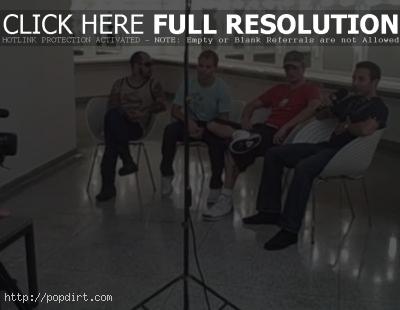 The Backstreet Boys provided what it looks like behind the scenes of an interview they did while in Brazil in a video clip at their YouTube channel. Howie Dorough talked about the boy band’s most memorable time in the country, while Brian Littrell said it’s an amazing feeling to still have so many people come and see them perform.

“We actually came over here, I think actually before the concerts,” Howie said. “We had some promotion, but I think probably the most memorable times that we had here in Brazil was during the 100 hours around the world, and we stopped in Rio, and we had an unbelievable turnout at the airport. People followed us down the streets next to Copacabana beach, where we had this performance up on top of this rooftop. I think there was 40 or 60 thousand people down below. Shortly after, we came back here for the tour and played Sao Paolo and Rio and had amazing nights here, the stadiums there. Brazil has always been a crazy place for us, we love the people, the music the food and everything’s great. Actually last night we had a Brazilian barbeque and we’re still feeling it today.”

Nick Carter talked about the dangers of wearing a scarf when mobbed by female fans who end up choking him with it. “Truthfully though, we love the attention,” Carter said. “We’re happy that they love us so much and they’re so excited to see us. We don’t want that to stop.”