Ahead of Tuesday night’s ‘American Idol’ performance finale between Jordin Sparks and Blake Lewis, intrade.com shows Jordin a big favorite over Blake. The Phoenix 17-year-old is bid at $75 to win $100, while Bothell’s beatboxer is at $25 to win $100. With Jordin, Blake and last week’s castoff Melinda Doolittle all being within the margin on DialIdol last week, it is largely expected that most of Melinda’s votes will shift towards Jordin, ensuring her an easy victory barring a Tuesday night on-stage meltdown.

May 19, 2007 – During a conference call with reporters, Simon Cowell admitted he cannot predict who will win ‘American Idol’ and he wants contestants on the show to be rude to him when he is offensive to them. “I can’t call it at this stage,” Cowell said. “For Blake [Lewis], he’s a brilliant entertainer, but the negative is he’s not a fantastic singer. The advantage for Jordin [Sparks] is she is a great singer and the negative is she hasn’t done one performance yet which I can remember as a ‘wow’.” 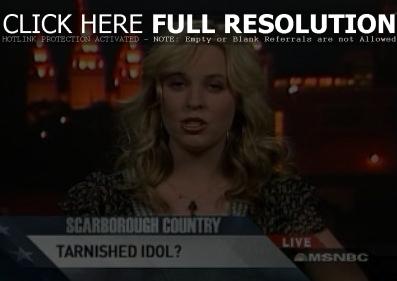 May 19, 2007 – Melinda Doolittle, the ‘American Idol’ contestant that even Simon Cowell liked, was voted off on Wednesday night as another Fox show beat the program in the ratings. ‘Scarborough Country’ host Joe Scarborough asks former ‘Idol’ contestant Carmen Rasmusen if the hit show is dying. Video of the segment, aired Thursday (May 17), at Bing.com has since been removed.

May 18, 2007 – ‘American Idol’ castoff Melinda Doolitle was on the phone with Ryan Seacrest of KIIS FM in Los Angeles this morning, talking about her surprise ouster from the hit show last night. Doolittle said she was a little relieved to get the boot and doesn’t feel cheated, the judges reaction afterwards, her family’s reaction, and more. Audio at kiisfm.com has since been removed.

May 18, 2007 – Melinda Doolittle was voted off ‘American Idol’ on Wednesday night, but ‘Good Morning America’ reports the singer has a good chance at a successful career. The segment, featuring comments from Entertainment Weekly’s Michael Slezak, has since been removed at abcnews.go.com.

Former ‘Idol’ Contestant Robbed At Gunpoint While Working At IHOP

May 14, 2007 – Alexis Lopez, a ‘American Idol’ contestant from season one who was eliminated in the wild card round, was held and robbed at gunpoint while working at a Granada Hills, California IHOP restaurant early Sunday morning (May 12). “He kept demanding the combination to the safe and I told him I didn’t have it,” Lopez said. “I said, ‘Shoot me, I don’t have it.’ Then he put the gun at my forehead and all that ran through my mind and I was on ‘American Idol’ at 17, I’m ready to come out with my album and he’s holding a gun at my head,” Several video clips, including an interview with Lopez, have since been removed at flynetpictures.com.