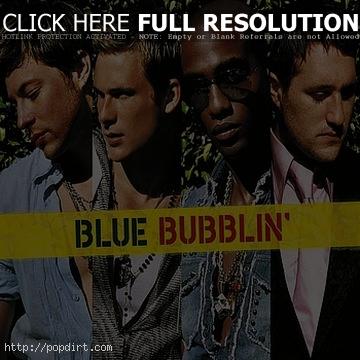 British boy band Blue are out with the music video to their new single ‘Bubblin”. The song is featured on their third studio album ‘Guilty’, released on Innocent Records. Watch it online below.

Backstage With Blue At Top Of The Pops

June 3, 2004 – Top of the Pops’ official website has details behind Blue’s visit on the program last week, where Simon Webbe got a door slammed in his face, Lee Ryan shocked with rigorous pelvic thrusting action, Antony Costa insulted Sam & Mark, and Duncan James tried his best pickup line on one of the group’s dancers.

No Split For Blue

May 12, 2004 – Blue star Antony Costa tells Radio 1 there’s absolutely no truth in the rumor the band are going to go their separate ways. “No, no, we’re not splitting, not at all. We’re still stronger than ever,” he said. “People, the public, you know, they’re bored they want to start rumors. They can’t let people just get on with their jobs.”

April 17, 2004 – The Mirror reports Blue have given permission for their hit song ‘One Love’ to be used in Kenyan ads for Trust condoms. Group member Lee Ryan said: “At least the ad’s not for pile cream! Seriously though, there’s a real push to promote contraception in Africa so we’re glad to do our bit. So to speak.”