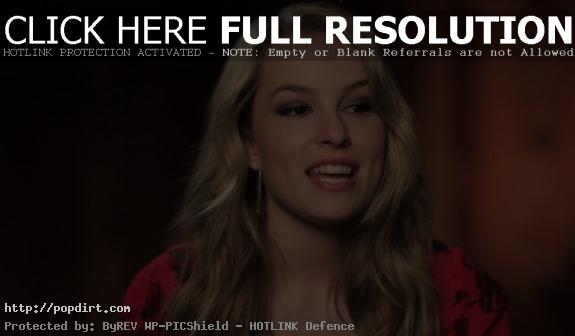 Bridgit Mendler talked about a track from her debut album ‘Hello My Name Is…’ entitled ‘Hurricane’, including what the song is about and the process of recording it. Additionally, Mendler performed the song for VEVO Lift.

“The song ‘Hurricane’ is about a story relationship where this girl is kind of overwhelmed with the drama of a guy and how he keeps saying, ‘Oh, it’s gonna be better. We’re gonna be in the clear’. Then each time, something pops up again that makes her wonder if they should really stay together,” Bridgit explained. “She is afraid of being in the relationship where there’s so many factors that are outside of her control, but I think she’s also kind of enjoying the ride.”

As for the process creating the song, Mendler explained, “Working with Eman Kiriakou and Evan Bogart and Andrew Goldstein was such a fun writing process. For the breakdown in ‘Hurricane’, the voices are actually the voices of Andrew, Eman and Evan all in there, and me, doing different characters. I think we each went through and did two different characters, and we were all in the booth together at one time. It just worked out perfectly. We wanted it to sound like a full chorus of people.”

Explaining what she feels is the best part of the song, the 19-year-old said, “I think the bridge is probably my favorite lyrically in the song. I love the colorful lyrics and the verses. I think they’re really fun, but I love that the bridge just kind of explains it.”

Watch the commentary and performance after the cut.