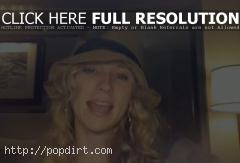 Brooke White posted a video blog while she was in New York City on her MySpace TV channel. The ‘American Idol’ season seven finalist was there to do “some music stuff” and writing some songs, adding that she can’t wait for fans to hear them. Brooke said it’s been raining while she was there, so she’s been wearing a hat – which she then messed around with.

“I am actually in the Big Apple right now, New York City,” White said. “I flew in about 2 AM last night on the red eye, and I’m here doing some music stuff. Writing songs tomorrow, which is gonna be cool. I’ve been writing songs and it’s been great. Really good experience for me.”

Watch the clip via MySpace below.