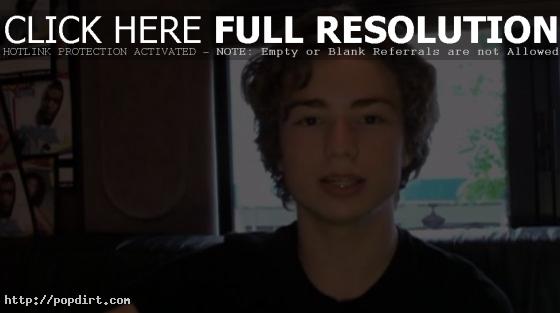 Burnham told fans their favorite moments while on the Teen Island Fan Fest Tour in their latest YouTube video. Andre talked about being able to travel state to state and see the sites, while Alex said the 14 hour bus ride that took them to Florida was the best as it allowed the tour acts to bond, and Forrest said the dinner party was the best.

Andre said, “My favorite Teen Island Fan Fest memory, besides wearing those awesome big nose glass eyes things was being able to travel state to state in one day.

One day you’re in Memphis, you get to see all Tennessee and stuff, and the next day we’re in Louisiana, we’re driving and see all these bayous and rivers and check out the scenery. It was really cool.”

Alex added, “My favorite memory of the Teen Island Fan Fest is, people don’t like to travel and they’re like, ‘Oh, I have to travel today’, but my favorite part was the 14-hour bus ride that took us to Florida, because there’s like eleven people on the bus and we really got to bond and have fun and we played some poker, watched some movies,

talked about stuff, shared music, so it was really fun to get to know everybody and hang out.”

Forrest concluded, “My favorite memory of the Teen Island Fan Fest was last night we had a big dinner party and stuff, and we had great steak. My steak just had the burned off and served to me and it was awesome. After, Slim our sound guy, he just said, ‘Do you want to play laser tag?’ I said, ‘sure’ and I got him a lot.”