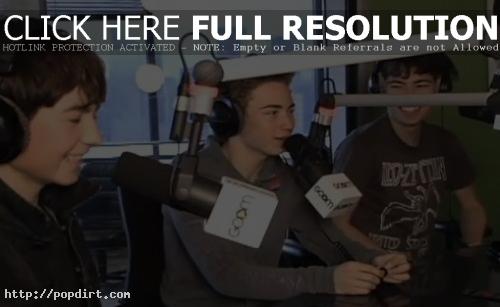 Burnham stopped by GOOM Radio chat with Zach Sang. Brothers Alex, Andre and Forrest talked about their awkward prior visit with Zach, going on tour with Justin Bieber, things they’re afraid of, if they get nervous on stage, Segways, and more.

On touring with Justin Bieber, Andre said, “It was amazing. Every night playing in front of 15 to 20 thousand people, how much better does that get?” Forrest added, “Every time we meet a fan, it’s not awkward. It’s awkward when you meet people that you’re acquainted with, but not when you meet people for the first time.”

Expressing his worst fear, Andre said, “My worst fear is probably bananas. You know when you open up the banana there’s the black bits in it, I just hate that. I freak out and throw it out. Some say it’s actually spider eggs, the black bits in bananas.”

Talking about if they’re self conscious on stage with the big arena tour with people watching every move they make, Alex said, “I remember the first show, that was pretty terrifying. I tried to put it out of my mind when we first got to the venue. I was like, ‘Okay, we’re at the venue’, I see the stage being set up, I see the empty chairs and I’m not thinking about it. Twenty minutes before I got on, I heard the people in the crowd milling about and I’m like, ‘Oh man, this is crazy. What am I doing?’ It was pretty scary, but once you get on stage (it’s okay).”

Andre added, “The first show was the one like Alex said, was the scary one. For me, I haven’t really been super nervous ever since. When you’re backstage and behind the curtain and you’re getting ready to go on, the few seconds before you go on, you get the butterflies.”

Forrest then said, “Yeah you can get a little nervous there, but the entire day that’s leading up to the performance, it’s just a great time hanging out backstage, and it’s just so amazing. I have a skateboard and I skateboard around backstage. It’s awesome.”

September 27, 2010 – Burnham, Ne-Yo, Aaron Fresh, and Nick Cannon were all rockin it out at Hard Rock Cafe in Times Square on Thursday (September 23), all to help save children’s lives. “It was just amazing just to bring happiness to them, and the smiles, and just the difficulties that they’re going through and they continue to go through, it’s great to bring joy to their lives,” vocalist Forrest Burnham said. Video from the Children’s Miracle Network fundraiser from Fox 5 in New York has since been removed at worldnow.com.