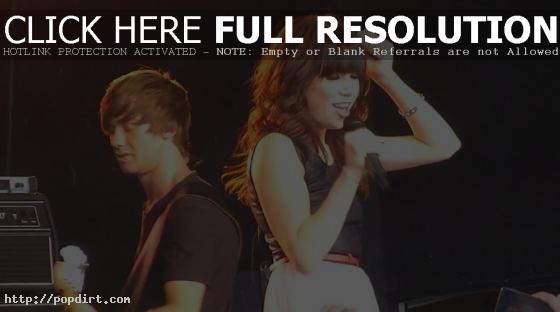 Carly Rae Jepsen was recently on the phone with Jackie and Bender of KISS 106.1 FM in Seattle, talking about the reception she gets from the crowd while on tour with Justin Bieber, how a young Bieber fan surprised Carly Rae with her strength pulling on her arm, understanding the screaming young girls loving Bieber, if she’d ever bring someone on stage for a kiss, being pumped about her acting debut in ‘90210’ and having ‘This Kiss’ featured on ‘Fun Size’

On what it would take for a guy to get her attention, Carly said a boyfriend would get in the way, “It would be pretty tough because I am a taken woman. We’re both kind of traveling, so we see each other when we can.”

As for whether she’d emulate Carrie Underwood and bring someone on stage for a kiss, Carly Rae said, “I don’t think that’s my style. I’m impressed by that. That’s brave. It’s already enough for me to kind of jump up there and sing. I think I would be too nervous to kiss somebody on stage.”

On her ‘90210’ appearance, she said, “I’m so pumped for that. It’s my first TV debut. I have two lines. Actually, I kept forgetting one of them. I’m not very good of an actress. It was really enjoyable anyways. I had at least three or four (retakes). I kept on giggling. I’m a big giggler when I get uncomfortable. I just start laughing.”

On having a song featured in ‘Fun Size’, she said, “It’s basically a Halloween-ish type movie. The cool thing is my new single ‘This Kiss’ is kind of being featured in the film in some of the shots and the opening. It’s rad. I got to see the movie exclusively all private, in the theater. It was a lot of fun.”

Listen to the interview via kissfmseattle.com below.