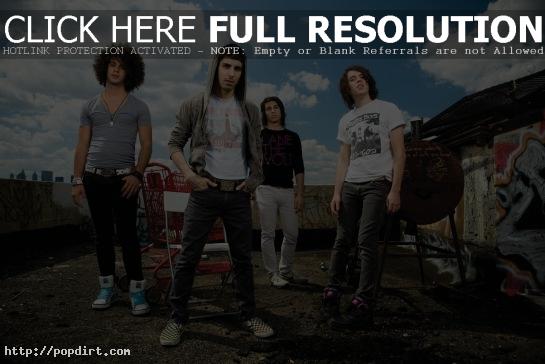 Jean Paul Makhlouf of Cash Cash checked in with fans on their blog at MySpace (@cashcash) on Thursday (August 6), talking about the mysterious departure of guitarist Mike Doerr from the band and getting a bit catty (though justifiably if his explanation is true) about carrying on without him. The singer writes:

On to some other news, some of you guys are wondering where Mike went?!? Well let me fill ya in on the situation from the beginning… Back in the day me, Alex, Sam, & Anthony got this band rolling as The Consequence. Then in 2007 we got signed to Universal, changed our name, and started touring. We thought it would be a good idea to add an extra guitarist live. So we started playing with Mike a little under a year ago. He first started as just a live touring musician and then after he earned his badges we put him in the photos and made him a band member. Then, out of nowhere he just got up and left us high and dry in the middle of Warped Tour with no goodbye or anything… we thought it was a little weird, especially since there wasn’t any big fight or anything… Our assumption is that he just wasn’t really into the whole band thing anymore, was getting worn down by the road, and has some other important stuff in his life he needs to cater to. Overall he just didn’t have the passion that the rest of us have… the road isn’t for everybody… this lifestyle is very different than any other job and calls for an extra dose of passion and motivation.

Anyways, here’s my reaction to the whole thing…. so when he left, at first we all freaked out and were like “WTF” it’s in the middle of the Warped Tour and were a man down.. what to do, what to do we got a show to play?!?!” Then I sat the guys down back stage, gathered my thoughts, and was like wait a second… Mike has absolutely ZERO effect on Cash Cash!!!! I was like lets wake up guys we started this band as a 4 piece!!! Recorded our cd as a 4 piece!!! Played shows as a 4 piece!!! And will finish the band as a 4 piece!! We played the show without him and it never felt better!!