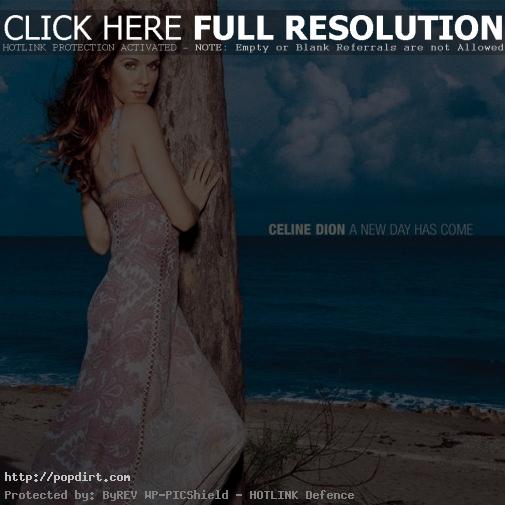 After four years without entirely new studio albums, Celine Dion is back and announces that “a new day has come” in her life. the trouble about the word “new” is that it doesn’t necessarily mean “better” – and believe me – it really does not in this case!

first of all, let’s “analyze” what’s so “new” in Celine Dion’s life. there is a short and simple answer: Rene-Charles, her baby. and this little boy that smiles at you so lovely about 40 times in the albums booklet enters Celine Dion’s lyrics strongly. and this is what is really new on Celine’s “new day”: apart of one hundred ways to say “i love you” she’s singing now such sweet, sweet verses like “i found it all in the eyes of a boy” or an even sweeter combination with her accient subject: “there’s is no other love like a mother’s for her child” penned by Robert “Mutt” Lange that recently wrote for Britney Spears too (“don’t let me be the last to know”) and nobody can’t deny that the musical parallels of Mrs. Dion and Mrs. Spears are getting more and more obvious which is in fact a “new” thing too, but – exactly like the “new” lyrics” – in a completely negative sense.

unfortunately this “Mutt” Lange track called “goodbye’s (the saddest word)” is not the only one that’s sounding “Britney-ish”. out of the 17 more-or-less-new tracks – believe it or not: there are actually five (!) cover songs and a completely unlistenable radio remix of the title track that you might have heard on the radio recently – more than the half are “bubble-gum”-radio-song (“i’m alive”, “right in front of you”, “when the wrong one loves you right”, etc.) that you’ll forget forever right after you heard them, but “that’s the way it is”…

except this “new” style -that might be new for Celine, but not for the current music market – Dion tries to do some soft-r’n’b on “rain, tax” and “superlove” that are two of the better tracks, but still not outstanding. another track that can be rated “listenable” is “i surrender” that reminds a lot of her accient songs though. pretty unlistenable are the following ones: a Cher sounding discotrack called “sorry for love”, a Spanish version of “l’amour existe existe encore” (which had to be added since American Hispanics chose Celine as their favorite singer last year), a cover version of “nature boy” (for all the fans of the motion picture “Moulin Rouge!”), another cover version of the standart “at last” (for all the people that bought Robbie Williams’ “swing when you’re winning” recently) and to complete the list Mrs. Dion sings English adaptions of two french songs that ruled the national charts last year (sort of apologizing her come-back-album isn’t a french one).

it’s pretty easy to discover the marketing program behind Celine’s “new day”: “let’s do an album that contains for everyone at least one track!” unfortunately Celine Dion lost her own style in this mixture of styles and this is what makes the album a complete deception. the other sad thing is that Rene Angelil’s marketing plan seems to be more successful than ever: experts expect Celine to enter for the first time in her career at number one on billboards album 200 with “a new day has come”. now it’s pretty interesting to know that “sonymusic” absolutely needed this success suffering a lot of today’s mp3-online-sharing-programs. “all we need is another “thriller”…” Tommy Mottola said before “invincible” by Micheal Jackson was published last fall. after the disappointing number of sales, “sonymusic” gave their destiny in the hands of Celine Dion, or to be more exact, in the hands of Rene Angelil that finally succeeds his mission to keep “sonymusic” alive, even if the price he had to pay was class of his wife’s records.

One thought on “Celine Dion ‘A New Day Has Come’ Review”