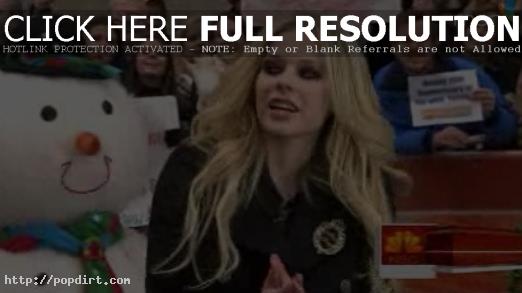 Avril Lavigne visited ‘Today’ on Monday (December 11), where the singer spoke about writing ‘Keep Holding On’ for the ‘Eragon’ soundtrack and her plans for the holidays with husband Deryck Whibley of Sum 41. Lavigne, not known for her interview skills, was shockingly upbeat during the interview, suggesting that she’s received some media relations training. Video of the segment at Bing.com has since been removed.

November 5, 2006 – Contributed Anonymously: Avril has recorded a new song ‘Keep Holding On’ as the theme for the upcoming movie ‘Eragon’. The song is supposed to be available for digital download on December 15th and will be included on Avril’s next album, which is due in April 2007.

Avril Lavigne Helped Out Of Hyde

October 9, 2006 – Footage of a drunken Avril leaving Hyde club propped up by two friends while being heckled by paparazzi, and a separate clip of the singer leaving Area with Sum 41 hubby Deryck Whibley, has been posted online at Celebrities.com.

October 8, 2006 – Avril was videotaped heads to the parking lot after having lunch at the trendy Newsroom Cafe in Beverly Hills, California with an unidentified male friend. The singer was very tight lipped as she went to her friends car, resisting her urge to spit on the paparazzi. Footage at splash-video.com requires an account.