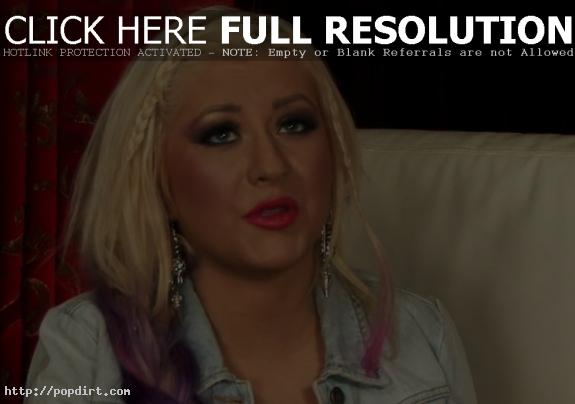 Christina Aguilera chatted with VEVO News for an interview, where the pop singer talked about trying to juggle motherhood with her music and work on ‘The Voice’, taking time between albums, enlisting Melina Matsoukas for the ‘Your Body’ music video, and her “amazing collaborations” with Sia Furler.

Commenting on her busy workload, Christina said, “It was really hard for me to sort of juggle everything. Being a mom, being on ‘The Voice’, which is crazy long hours. Every project that I put my foot forward in doing I believe whole-heartedly, passionately in, so I can’t give anything less than 150%. When you’re going, going going like that, it’s a lot of work.”

Talking about delays between albums, Aguilera said, “Fans are like, ‘When are we gonna hear new music?’ for a while now, but it’s gotta be right. I have to put things out and only do things when it just feels 100% genuine. I’m finally at a place now where it’s taken some time, but I’m so thrilled with the release of the record. ‘Lotus’ is sort of me coming to this place of feeling rejuvinated and embracing myself as a woman and who I’ve become as an artist and all that I’ve experienced.”

Discussing the ‘Your Body’ music video, she said, “In the video I got to work with Melina Matsoukas, who I was really gravitating towards, because she has such an imagination. She sort of created this character that goes out. She’s definitely a bad ass. She knows what she wants, but she’s very playful and she doesn’t take herself seriously. I want the audience to have a good time too and sort of live vicariously throgh this character. It’s very playful. It’s sort of seductive and sexy. It was just a really fun character to play.”

Commenting on her latest collaboration with Sia Furler, she said, “Sia and I have done amazing collaborations together. She worked with me on the movie soundtrack ‘Burlesque’, which we got a Golden Globe nomination for. We also did a lot of work on my ‘Bionic’ record that was very sentimental and very intimate and vulnerable feeling, and that’s what I love about working with her. It’s a very natural process and we wrote a beautiful song together called ‘Blank Page’. A lot of people that hear the record say ‘That’s my favorite song on the whole record’. It’s one of those songs that I think everyone can connect to on a certain level.”