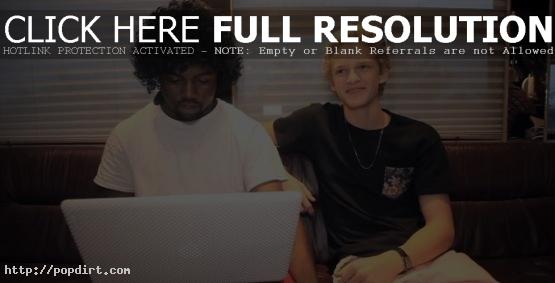 Cody Simpson was joined by his bassist Tarron Crayton, answering fan questions in episode seven of ‘Cody Simpson: Wish U Were Here’. Cody was asked by Crayton what he loves about his fans, a favorite childhood memory, the favorite song on his new album ‘Paradise’, how Goldfish crackers and ketchup are his favorite snack, and more.

Asked about what he loves about his fans, Cody responded, “Just that they’re so dedicated, honestly. They’re always tweeting and Facebooking and at all the shows and voting. Whatever they can. They’re always there 24/7.”

When quizzed about his favorite childhood memory, the Australian pop singer said, “It would have to be the first time I ever picked up the guitar. I was 6 or 7 years old, and my grandparents bought me my first guitar for Christmas, and it felt so good, honestly, when I first picked up the guitar.”

Simpson said his favorite song on ‘Paradise’ is the single ‘Wish U Were Here’. “When we first wrote that song, I just thought dang, this has to be the single. It’s such an important emotion for me, and we had a lot of fun shooting the video out here on tour. I would say I have a lot of other favorites on the album. It’s very hard to choose for me because I love every single one in a different way.”

As for his favorite snack, Cody cited Fig Newtons before Crayton reminded him of Goldfish crackers, which prompted them to pull out the emtpy box where Cody said, “I just had this entire box. That and I also like ketchup. Ketchup’s it. Ketchup and Italian food.”