Cody Simpson Offes Fans A Look Inside His Tour Bus 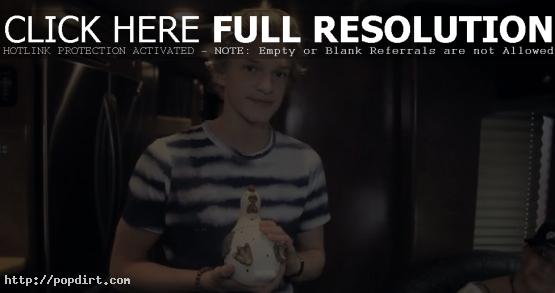 Cody Simpson has released the premiere episode of his Wish You Were Here Summer series, which features the Australian pop singer showing fans around his tour bus.

“As you can see, this is where I sleep,” Cody said after being woken up by his sister Alli. “I sleep up top because I like the feeling of being in charge.”

Moving to his next stop, Cody said, “This is the back of the bus. That’s kind of where I spend a lot of my time, because I don’t really go up front. That’s where the older people hang out.”

Pointing out the bathroom, Cody explained, “This is where all the funny business goes on. No number two’s on the bus, by the way. The number one rule of tour is no taking dumps on the bus.”

Cody then showed off his ceramic chicken. “Infamous little bugger isn’t he,” Cody asked. “He’s been everywhere. He likes to meet other female chickens, and usually we don’t allow the female chickens on the bus because he’s a bit of a pimp and we try to make sure he stays young. We don’t want any chicklets yet.”