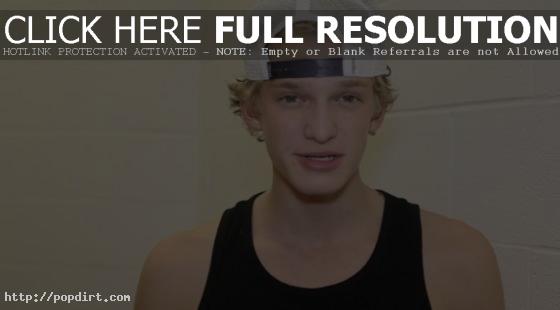 Cody Simpson recently visited the 106.1 KISS FM studio in Seattle to promote his show with Big Time Rush at the Puyallup Fair. The Australian pop singer talked about still being pretty young, the kind of car he wants to get when he’s 16, his busy schedule, the interactive YouTube movie ‘Finding Cody’, and where he sees himself 5+ years from now. Cody also performed an acoustic version of his single ‘Wish U Were Here’.

“A lot of people, they don’t realize that I’m actually, I can’t drive a car yet,” the 15-year-old explained. “I don’t even have a permit or anything, so still pretty young. Still have a couple years of growing up to do obviously.”

On possible car purchases when he’s 16, Cody said, “I have a dream car, but maybe like an Audi or something. Something that’s cool, but not too flashy or anything… I don’t really want an average car, especially when I’m 16, I don’t want people to see me in some flashy car, it’s kind of weird for a 16-year-old.”

As for what he expects to be doing five years from now, Cody said, “Hopefully still making music, still inspiring my fans and stuff like that. As you hear on the album, a lot of the music sounds very chill, very Aussie beach fun kind of chill records. That’s definitely the kind of music I see myself doing, especially five years from now. I’ve always been inspired by artists like Jack Johnson and John Mayer, Jason Mraz, people like that I really look up to. Hopefully keep on making music and travel around and do what I like to do.”

Listen to the interview and ‘Wish U Were Here’ performance via kissfmseattle.com below.