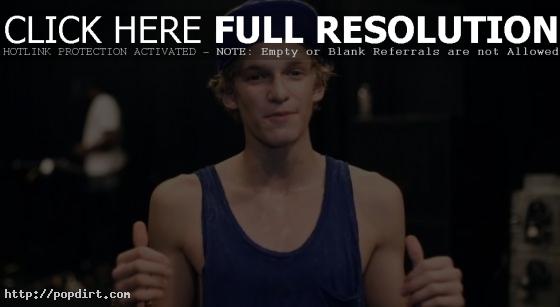 “G’day all, it’s Cody here. Today is October 2nd, the day of the album release, which I’m super stoked about. One of my first stops of the day today is the SIR Studios here in Hollywood. I just got amazing news that the first morning the album is going #1 pop album on iTunes in the U.S. and Canada, which blows my mind. To have you guys support it so much I love you guys so much. Stick with me, today is one of the biggest days of my career yet.”

Justin’s ‘Wish U Were Here’ collaborator Becky G then checked in, saying, “We just wrapped up rehearsals for ‘Ellen’ tomorrow. Super, super excited. Cody is killin’ it and we’re getting ready for the Staples show, so check it out.”

After rehearsing, Cody updated fans saying, “So it’s 3 PM now. We’re still not finished. We just did three hours or more of dance rehearsal. I’m so sweaty right now, but I’ve got to get home. Go get changed and perform at the Staples Center tonight with Bieber and Carly Rae.”

Before hitting the state, Justin’s manager Scooter Braun sent out a message to Cody, stating, “I want to say congratulations. Your album is now out. It is actually incredible. The fact that you’re fifteen and this talented is also incredible, and you’ve been killin’ Staples Center. Women are going absolutely made. You’re making Australia proud. Congratulations on your album and killin’ it at Staples Center, and Justin told me he wants to have you on more dates, so rock n’ roll.”

The other support act for Bieber, Carly Rae, added, “I just want to say congrats on the amazing album ‘Paradise’. We’re gonna have so much fun on the ‘Believe’ Tour. I’m really looking forward to catching your set every night and perhaps coming on for my set and joining me for ‘Good Time’. Have a good one and everyone go buy that ‘Paradise’ album.”