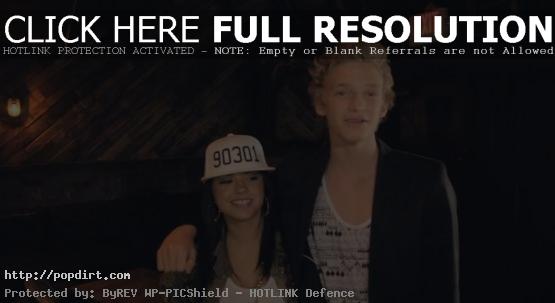 Episode two of the Cody Simpson Wish U Were Here Summer series features the Australian pop singer taking viewers on set and behind the scenes of his new ‘Wish U Were Here’ music video, which features Becky G.

“We’re in Houston, Texas at this really cool kind of club. It’s all wooden. It’s very vintage and we’re on the set of the ‘Wish U Were Here’ music video with my girl Becky G,” Cody said at the start of the clip.

“The story is we wanted to capture the energy of the tours,” the music video’s director Cameron Duddy explained about the concept. “What goes on on and off stage, because it’s such a fun vibe.”

“You know it’s been a good day,” Cody said, joined by pint sized Becky G, after shooting wrapped up. “We’re about to go to soundcheck right now for the show here in Houston, Texas. The first time performing together tonight and it’s gonna be pretty cool. We’ve had like one rehearsal go-through ever, so we’ll see how it goes.”