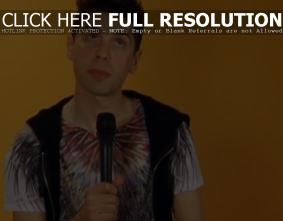 Dan Black described his sound and how he was once described in a brief video clip at Logo TV.

“I guess it sounds like a spaceship crashing into the sun with a load of computers crying on board,” the British electronica singer said.

He added, “Somebody once weirdly described me as being like Liam Gallagher if he had been born and raised by Quentin Crisp. Part of me thinks ew, that’s horrible, but part of me thinks hey, I guess that’s kind of true. Lots of things I like are very contradictory, and I think the kind of person I am is contradictory. I don’t like just singing in one camp. I’m quite happy to straddle many camps.”

«Gabriella Cilmi ‘Ten’ Track-By-Track Commentary
The Bird And The Bee ‘I Can’t Go For That’ Live Video Ft. John Oates»