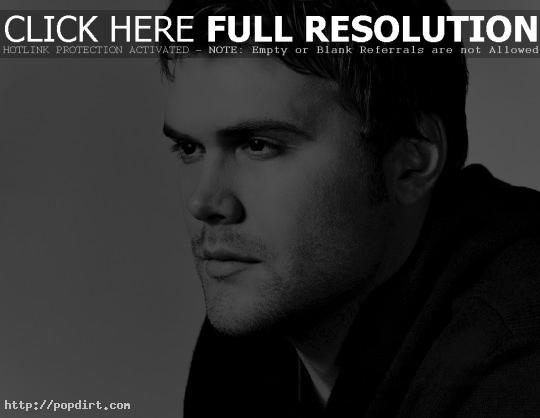 Daniel Bedingfield stopped by MTV”s Total Request Live on Friday to talk with Hillary and perform ‘Gotta Get Through This’ and later wrapped up the show with ‘James Dean’. Daniel also brought along his girlfriend Gina and introduced her, saying it was her who inspired him to write ‘Gotta Get Through This’. Read on for a transcript.

Hillary: Thanks for comin’ out. They love you here.

Hillary: The girls love you, freaking out. Did you know it is ladies
day on TRL today.

Hillary: Where are the ladies

Hillary: They are all here for you born in New Zealand and raised in
New York City. How do you like it.

Daniel: I like New York City it beats with the same tempo of my heart
you know what I’m sayin’.

Hillary: Your album has a very cool story you recorded most of the tracks in your bedroom on your computer in your underwear.

Daniel: In my underwear.

Hillary: — The record himself to get the music out.

Daniel: The less I have on the more free I feel.

Hillary: Really? You want to get free here.

Hillary: Now that the album has totally blown what will you do with the next, still record it in your underwear.

Hillary: Are you going to stay in your bedroom or go in the studio.
Do it out in the street.

Hey, why not I tell you what, let me say nothing and lift my arms up
and see if they still scream that’s fantastic, wonderful.

Hillary: They can do anything you want they will still scream they are
great. The song has a great sister, too tell us about this.

Hillary: I think she’s in the crowd.

Daniel: This is Gina I wrote the song for her and never told each other.

Hillary: How does it feel. Everybody loves this.

Daniel: You guys can see why; right?

Hillary: Oh, that’s a little nice moment there. Thank you so much. People are talkin’ about your album and how your sound is so original, unique, everybody is so excited how original it is. What do you think your sound is like?

Daniel: Uhm, well, — doin’ [Inaudible] Quite a while in London but it’s dance music a journalist once described Stevie Wonder and sting and Michael Jackson trapped in a basement.

Hillary: The acoustic version of this has a sting taste to it, very
cool.

Daniel: Yeah, I would actually.

4 thoughts on “Daniel Bedingfield Talks And Performs On TRL”