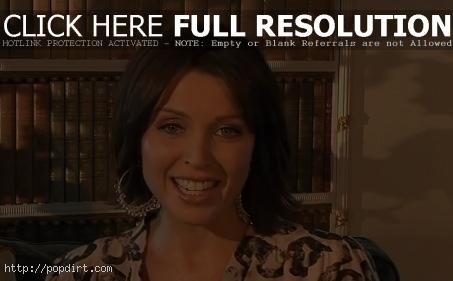 Dannii Minogue is featured on the cover of Who magazine, where the pregnant Australian singer reveals she could get “addicted” to pregnancy. “I thought it was absolutely going to freak me out, the whole body change and hormonal change. But I am loving it,” the 38-year-old ‘X Factor’ judge said. Dannii is one of the 25 people on the mag’s Most Beautiful People 2010 list. Read more.

February 28, 2010 – Duel citizen Dannii Minogue heaped praise on the UK and blushed about her pregnancy in an interview with ITN. “I’m very very much an Aussie girl, I’m wearing an Australian designer tonight, and I fly the flag, but I’m so happy to have had time here in London and I think both Minogue sisters, we’ve been embraced, and we appreciate that a lot,” Dannii said at the Elle Style Awards in London the other night. Watch the segment via YouTube below.

Will Pregnancy Force Dannii To Leave ‘The X Factor’?

February 23, 2010 – The Mirror reports that Dannii Minogue said at last night’s Elle Style Awards she probably won’t be appearing on the new season of ‘The X Factor’ due to her pregnancy. “If they’re auditioning in the hospital in Australia, yes, but otherwise no,” Minogue said, according to the British tabloid. “I will totally miss Cheryl and Louis and Simon, and not being there for the auditions, but I really need to be near my family in Australia at such an important time.”

But Dannii seems to indicate otherwise to her Twitter followers (@DanniiMinogue) moments ago:

I have not quit #TheXFactor! If possible I would love to be a part of the live shows and continue to fly the Team Minogue flag.