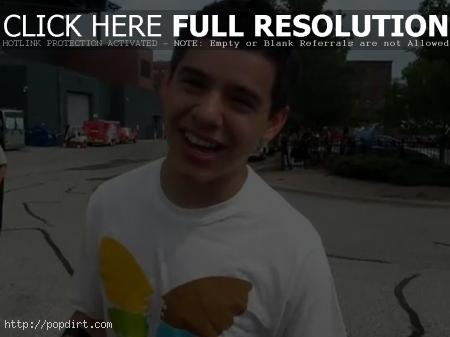 ‘American Idol’ season seven runner-up David Archuleta checked in with fans on his blog at MySpace (@davidarchuleta) on Monday (June 30) with the following message:

Tomorrow’s our first show!! I have to admit I’m a little nervous, but I’m way excited at the same time. We’ve been having rehearsals each day just getting ready for the big day, and everyone sounds great. Last night after the rehearsal Kristy Lee, Chikezie, Cook, Jason and his family, Carly and I went go karting and it was sooo much fun lol. At first I was kinda like eh, I don’t know if I should go or not, I should get some rest and stuff. But Kristy Lee pushed me into going and now I want to go again.

Also on Sunday my cousin and his wife came up to visit, which was cool to see because they’ve both been in the military and busy. We were able to just hang out for a little bit and went to church. Anyway that’s all for now.

Can’t wait to see everyone tomorrow at the show!