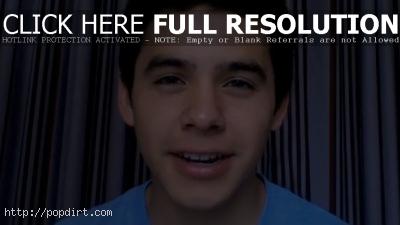 David Archuleta checked in from Dallas, Texas where he was for the Reebok 2011 Heroes celebrity baseball game. The pop star was singing ‘God Bless America’ for the event at the Dr. Pepper Ballpark. He talked about getting ready for Asia and his new website being up at DavidArchuleta.com. David also talked about checking out a Beyonce video online.

“Today I was looking on YouTube and there was this Beyonce ‘4’ thing and I thought maybe it was a video or something but it was kind of like a little documentary,” the ‘American Idol’ alum explained. “It was so cool, just Beyonce talking about her experience and how she’s out on her own and stuff, how she kind of split ways and trying to learn. She’s learning the hard way but the good way too, you know. I really gained even more respect for her and what she does and what she’s trying to do. It can be overwhelming in a way trying to get everything together. It’s amazing how something will be like a four minute video or four minute song and so much work goes into all of that. I thought it was kind of cool she gave a glimpse of what goes on in people’s minds and trying to get everything together.”