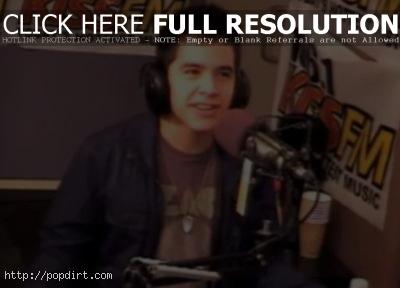 David Archuleta was in the studio with Jackie & Bender of 106.1 KISS FM in Seattle on Tuesday (October 21) to promote the release of his self-titled debut album, out November 11th. The ‘American Idol’ season seven runner-up talked about appearing at Miley Cyrus’ Sweet 16 birthday bash at Disneyland, how he deals with everyone recognizing him in public, how David hates his infamous laugh, how he got the “Lettuce Boy” nickname, how it was weird people thought he was dating Miley Cyrus and Taylor Swift, and the rumors about his father Jeff being a stage dad.

As for the TMZ rumor the other contestants didn’t like him, David said, “We’re fine. I hang out with them all the time. We all get along. I’ve never like got in any fights with any of them. And I think people want that so bad that they’ll just start talking about it. But we get along great. I hung out with Jason [Castro] and Brooke [White] this weekend and talk to them all the time.”

Audio at kissfmseattle.com has since been removed, but check out some of the video via YouTube below.