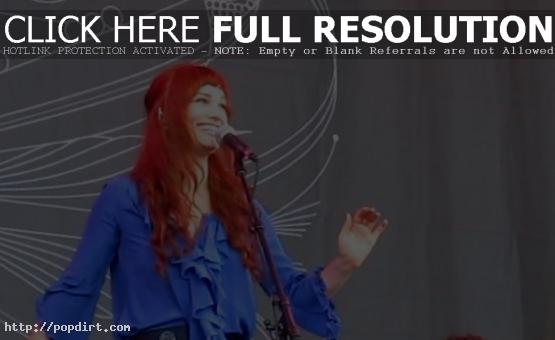 Alison Sudol, better known as A Fine Frenzy, got to meet David Archuleta recently in Hollywood after the ‘American Idol’ runner-up talked about how he had wanted to meet the singer. The two chatted about the album writing process, what made Alison want to do a children’s book. Alison then performed her song ‘Blow Away’ as Archie looked on and occasionally sang along.

“When you have done it enough you start to really know what you want to hear,” Allison told David about the album creation process. “I think it’s important to understand the kind of world you want to create with your music and what you want other people to feel and experience when they listen to. Just understanding the journey you want to take people on with your record. Then, once you know that, then you can kind of align everything else with that because you have sort of the bigger picture. That’s what I try to do.”

In response, David said, “That’s my ultimate goal, to get to a place where like I feel right now I’m still figuring out where it is that I’m drawn to, not just what I’m drawn to but things that I’m drawn to that I feel I can really help me be expressive with my music and be able to connect with people and accomplish what I want to with songs and making just music that has a purpose and can really have an effect on people in a way that I want to effect them. I’m still figuring that out. I am what I am and I think that’s why people were able to connect to me so much before on the show where I didn’t even have my own music. I want to be real. I want to be myself, because I feel that’s what people connect to the most.”

Alison: Aww look! Darling @DavidArchie and I had such a lovely meeting. He’s the sweetest!

David: @AFineFrenzy It was really great getting to chat with you! Thanks so much again for your time!