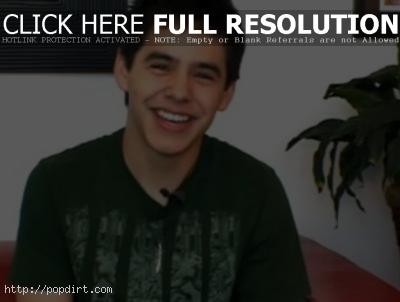 David Archuleta checked in with fans on his first video blog posting at YouTube. The ‘American Idol’ season seven runner-up thanked fans for their support.

“It’s just been great to see good feedback and to know all this hard work has been worth it,” David said. He added that life after the show’s finale has been “pretty crazy” and he said the finalists have been rehearsing now for the ‘Idols Life’ tour.

On a visit back to Utah, David said, “After New York I got to go home for a week, and that was great. Got to see my family and spent some time with them. Got to see my friends and we hung out a bunch.”

On touring with the other ‘Idol’ singers, David said, “Now we’re just rehearsing and it’s fun. It’s really exciting, something I’ve never done before with all the touring and stuff and all the cities we’re going to. I really can’t believe how many we’re going to, how long it’s going to be. I can’t wait, I mean all these cities I’ve never been to. It’s kinda gonna be fun to sightsee and see everything. The performing part of it, I mean we’re not competing against each other anymore. It’s just all for fun. It’s something I’ve been looking forward to. It will be fun to see the meet and greets, see what the cities are like. It’ll be a lot of fun going to Canada for one show. That’s pretty exciting. I’ve never been there. We have two shows in my hometown in Utah, well home state. That will be a lot of fun to see who comes to see the show.”

May 28, 2008 – The final eight ‘American Idol’ season seven contestants visited the ‘Access Hollywood’ stage and dished on all the behind-the-scenes secrets with Shaun Robinson. They talked about Simon Cowell’s harshest criticism, fans sending them gifts during the competition, Brooke White being considered the nicest, Michael Johns being the class clown and best dancer, Chikezie being the messiest, Carly Smithson spending the most time in hair and makeup, and Jason Castro having the best hair. Watch the segment below.