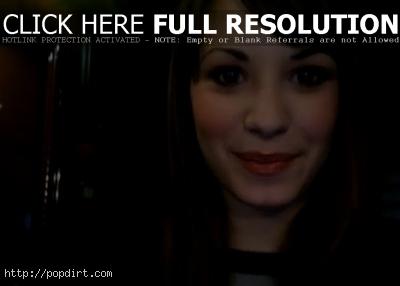 Demi Lovato posted her last YouTube video as a 15-year-old on Tuesday (August 19). The ‘Camp Rock’ star, riding in her tour bus, talked about the 5-week countdown before her debut album ‘Don’t Forget’ is released, the release of her ‘Get Back’ video on Friday after the ‘The Cheetah Girls: One World’ premieres on the Disney Channel, and “having a lot of fun playing shows” with the Jonas Brothers.

“Just hanging out on my bus, which is why this (camera) is moving all over the place,” Demi explained. “In two hours, I turn 16, so I’m really really excited. My sweet 16 is tomorrow, and I’m really nervous, because I’ve never turned 16 before. Just kidding. Anyways, today was the beginning of the five week countdown until my album comes out, September 23rd, called ‘Don’t Forget’, so don’t forget. I’m really really excited for that.”

She added, “I’ve been having a lot of fun playing shows. You guys in the audience are awesome. I love you all.”