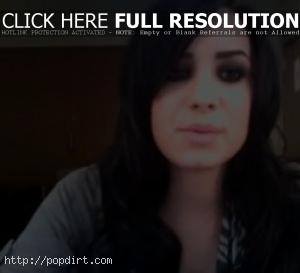 The 17-year-old discussed how she drove an hour to see Maylene & The Sons of Disaster after filming ‘Sonny’, her boyfriend Joe Jonas of the Jonas Brothers not sharing her fondness for heavy metal, keeping it fresh, what it was like working with Barney, the storyline of ‘Sonny’, and singing ‘Make a Wave’ on tonight’s ‘American Idol’ with Joe.

“I actually was at work for a few hours, ‘Sonny with a Chance’, my show,” Demi said. “I was super excited to be there of course but I was a little tired because I went to a rock show last night of one of my favorite bands. I drove a hour out to Pomona to see Maylene and the Sons of Disaster. They’re like a hardcore, southern rock, metal band. They were totally surprised (to see me). They knew I was a fan. They had kids that knew who I was so it was kind of awesome to go meet your favorite band. I was hey can I get a picture. Actually yeah, if you take a picture with us for our kids.”

On whether Joe Jonas shares her fondness for heavy metal, Demi said, “You know, I don’t really think so. We’ve talked about it. I play it for him and he’s like, woah, that’s crazy.”

Watch the interview part 1 and part 2 at DailyMotion.

«The Bird And The Bee ‘I Can’t Go For That’ Live Video Ft. John Oates
Nadine Coyle: Stop Bullying Me About My Weight»