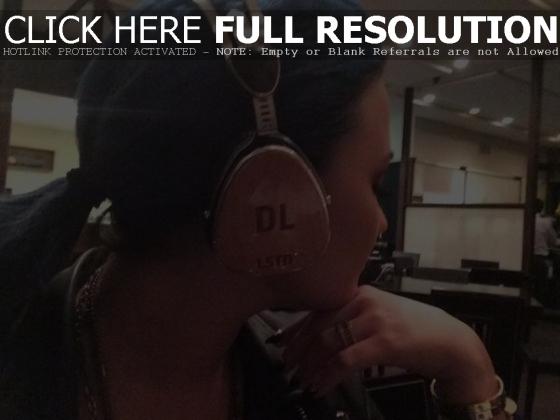 Demi Lovato reacted strongly on Twitter (@ddlovato) to the Lady Gaga performance at SXSW on Thursday night at Stubb’s BBQ, where the singer was vomited on by friend and “vomit painter” Millie Brown, who drank a bottle of neon green liquid before forcing herself to throw up on the Gaga while she played drums. Demi interpreted the stunt in poor taste in regards to eating disorders, writing on the micro blogging site:

Sad… As if we didn’t have enough people glamorizing eat disorders already. Bottom line, it’s not “cool” or “artsy” at all.

Would you let someone bring a needle and shoot up on you? Addiction is addiction.

It’s not “shade” and it’s not “hate”. But someone has to come forward and say it and I’ll take the heat for it.

@ladygaga you’re SO talented, if not one of the most talented in our industry PERIOD. Dope is INCREDIBLE.. but you don’t have to do that

So it’s cool if I do a speech about self-harm and then proceed to watch someone cut themselves on my stage? No. That doesn’t make it OKAY RT @kingsleyyy: @ddlovato Gaga herself struggled with an eating disorder. She gave a moving speech BEFORE her performance & I highly doubt her intention

Putting the word ART in it isn’t a free card to do whatever you want without consequences. RT @kingsleyyy: @ddlovato That wasn’t the POINT! The girl was an ARTIST

That’s an ignorant thing to say and you clearly don’t know anything about mental illnesses or addiction. RT @kingsleyyy: @ddlovato And you know comparing self-harm to this situation doesn’t even make sense. Accusing someone of “glamorizing” something they struggled with is WRONG.

Activists don’t shut up. If no one raises their voice, how are we supposed to be heard?

Watch the vomiting incident below.