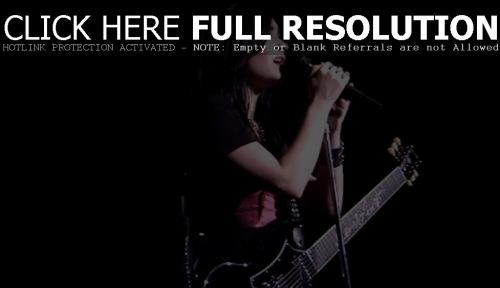 Demi Lovato dropped by ‘Good Day LA’ on Tuesday (April 7), ahead of her performance on tonight’s ‘Dancing with the Stars’. The 16-year-old talked about appearance on ABC’s hit show, the success of her new Disney Channel series ‘Sonny With A Chance’, how the paparazzi is weird to her, how her family has an unspoken rule about not talking about the business, and having “more to tell than you’d expect” if she would release an autobiography.

In the web extra interview, Demi talked about writing about 300 songs in her life since she was home schooled and didn’t have a lot to do growing up in Texas, getting ready to go out on tour, releasing a new album in July, offering “a lot more heart and soul” on the new CD, getting so nervious sometimes before performing, starring with best buddy Selena Gomez in ‘Princess Protection Program’ and how they became best friends starring on ‘Barney and Friends’, how the young fans “completely make this all worth it”, what she likes to do in her free time, and more.

Demi’s stepfather Eddie was then coaxed on camera, and talked about how they helped support his daughter’s dream to be a young star. Eddie said he and Demi’s mother have “tried to do the best we could and be the best parents we could” with Demi growing up. Demi added that her dad “can be strict” when it comes to dating, but no chaperones.

The interview videos at myfoxla.com have since been removed.