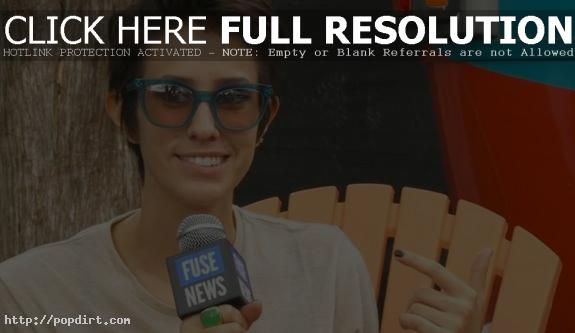 Dev spoke with Yasmine Richard of Fuse News recently at Austin City Limits 2012. The pop artist talked about her visit to Dubai, what to expect from her on the follow-up to her 2011 debut album ‘The Night the Sun Came Up’, what she’s learned about herself since dropping that album, and getting 2 Chainz to feature on the remix for ‘In My Trunk’.

On visiting Dubai, she said, “I just went a week and a half ago. Yeah, it was my first time. It was insane. It’s an adult Disneyland. Everything there is like the biggest, the tallest, the best, the prettiest. It was a lot of fun. We saw the tallest building in the world, I guess. It was very tall. They wanted to go to the top of it, I was like, ‘Hell no! You guys have fun up there. I’m gonna stay right here. This is fine.’ Yeah, it was a really pretty city. It was awesome.”

On her new album, Dev said, “It’s going really good. It’s been quite an eventful few years, so I have a lot of stuff to write about. I have a lot to say. It’s actually been a lot of fun.”

As for the album’s release date, she said, “In a perfect world, it would be obviously spring or summer of next year. I don’t wanna rush anything. I want it to be great.”

Asked what she’s learned between albums, Dev said, “I think I’ve realized I’m a lot stronger than I thought I was. I think that maybe I just didn’t give myself enough credit, or I didn’t find that yet in myself. I was kind of young when I made my first album. I just moved to LA from a small town. I think that now I know who I am a little bit more and what I can handle.”

Talking about getting 2 Chainz to get on her remix for ‘In My Trunk’, Dev said, “He did a really cool intro, and then he fit a verse. It was amazing and I definitely got cool points from my fiance. I love 2 Chainz, I thought his record was amazing. I’m a big fan, so the fact that he was on my song was really cool. He’s rad. He’s great, so it was a lot of fun.”

Watch the interview via VEVO below.