Drew Seeley Unveils Wax Alvin And The Chipmunks In Vegas 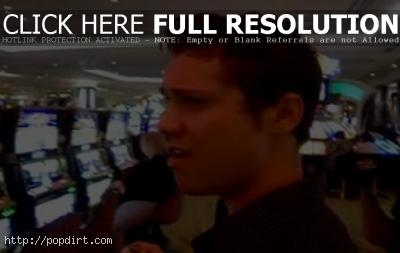 Drew Seeley unveiled Alvin and the Chipmunks at Madame Tussauds in Las Vegas for their 50th anniversary, signed autographs for fans afterwards, met up with Zac Zefron – the wax version anyways, promoted the appearance at a local Vegas television station, and teased the music video release of ‘Shake Your Groove Thing’.

“Here we are in beautiful Las Vegas,” Drew said at the start of the video. “We’re here at the Plaza hotel for an Alvin and the Chipmunks album release and a 50th anniversary party event. We’re just chillin. We just got here for the unveiling right now, so come fly with us and see what it’s about.”

Talking in his interview about the ‘Shake Your Groove Thing’ music video, Drew said, “It was pretty crazy. We shot it on the green screen and the guys got thrown in digitally later. It’s a great song. A lot of fun to remake.”

«Taylor Swift: Joe Jonas Left Me For Camilla Belle
Robyn ‘Dream On’ Video Behind The Scenes»