Drugged Up Paula Abdul Passes Out During Hair & Makeup?

A spy tells The New York Post that Paula Abdul has a short fuse with her assistants who don’t complete their duties soon enough. “There’s a salon chair in her house where she gets her hair and makeup done every day,” the tipster explained. “She’ll sit in it, set an alarm, and then, because she’s on so many painkillers, pass out while her hair and makeup guy gets her ready for the day. When the alarm goes off she’ll wake up, and God forbid the poor guy isn’t done yet. All hell breaks loose.” Abdul’s rep said, “There’s no alarm that I’ve ever seen.” 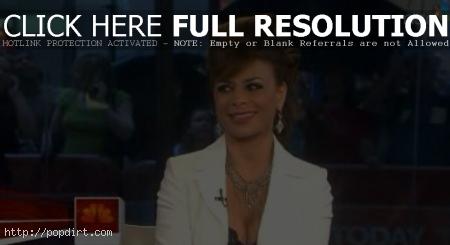 July 18, 2007 – Paula Abdul visited ‘Today’ to talk with co-host Matt Lauer about her new Bravo reality series ‘Hey Paula’, her special someone, and the rumors she’s hooked on painkillers – explaining her bizarre behavior.

Video of the segment, aired Wednesday (July 18), at Bing.com has since been removed.

June 12, 2007 – Paula Abdul was spotted leaving Bella Restaurant in Hollywood. When asked about Paris Hilton, the ‘American Idol’ judge said, “It’s pretty harsh and I feel bad for her, I hope she’s ok.”

Footage from Splash has since been removed.

June 9, 2007 – Conan O’Brien joked during his Late Night monologue on Friday night, “This summer, Paula Abdul will be starring in her own reality show. Did you know that? Yeah. Abdul’s reality show will be called ‘The Biggest Boozer’.”