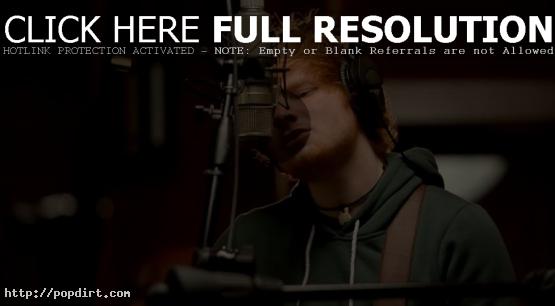 Ed Sheeran did an interview and live set at the Bing Lounge at 101.9 KINK.FM. Portland, Oregon earlier this year. The British singer songwriter performed ‘You Need Me, I Don’t Need You’, ‘The A Team’, ‘Lego House’ and ‘Gimme Love’.

During the interview, Ed talked about his 35-minute set opening for Snow Patrol, his plan of action for his opening set list, how he got the opening gig on the Snow Patrol tour, his decision early on to move to London to become a recording artist, not getting money from the parents when he made the move,

“I think the most important thing is to remember that people aren’t coming to see your songs when they come to a Snow Patrol set, so just entertain the hell out of them basically. I just try to be as entertaining as possible.”

Discussing how he got on the Snow Patrol tour, Ed explained, “I was friends with them before I came on the tour. They invited me on the tour personally, so they’re really cool people. I’ve been hanging out with them a lot and writing songs with them.”

Asked about his parents reaction to moving to London to work on a music career, he said, “It was my own decision, so I think they were cool with that. My dad kind of encouraged me. My mom wanted me to pursue university because to be a 16-year-old on your own in London with no money is not exactly a mother’s dream really.”

Ed added that there was no money coming from mom and dad while away from home either. “I basically had a rucksack full of printed CD’s that I sold every night at gigs and that funded everything,” he explained.

Getting the attention of Elton John, Ed explained, “It was through Just Jack. Just Jack had heard a song of mine called ‘You Need Me, I Don’t Need You’ and invited me on his tour, and Jack’s on Elton John’s management, so I got in with Jack’s manager Michael Stewart who is wicked and then I was on the management for a couple of years, had a little independent success, and Elton John gave a call to say he liked the EP. He actually buys every single new release, every week, anything, be it Justin Bieber, be it Slipknot. Three copies for each of his houses and he listens to every single CD every single week, and if he likes it, he’ll ring them up, which is pretty cool.”

Questioned on the advice Elton may have given him, Ed responded, “Just that America is quite a big country and don’t expect it all to happen at once. In the sense of things, Texas is four times the size of the UK, and the UK took five years for me to crack, so you’ve got 50 states and it’s gonna take a bit of time.”

Listen via Soundcloud below.