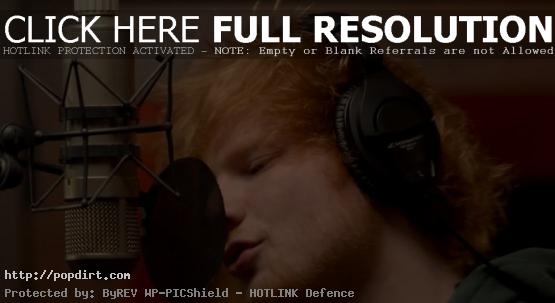 TJ of Z100 in New York City interviewed British singer songwriter Ed Sheeran. The visit included performances of his single ‘The A-Team’ and a piece of Pink Floyd’s ‘Wish You Were Here’ live in studio. Ed discussed why school sucks, if he views his success as surreal, how he meets women, what came between him and his high school girlfriend and more before confessing that this was the most he has ever opened up in an interview.

Asked what it was about school he hated, Ed said, “I hated that we were forced to learn stuff that we’re never going to use. I understand with science people may want to become doctors or dentists, so when we’re learning about dissecting frogs and stuff, I can understand that has a reason, even though I don’t want to be a dentist or doctor, there is a reason we’re doing it. But like trigonometry man, when are you ever gonna use trigonometry? (If you’re gonna be a math teacher?) I don’t think you are because it’s a vicious circle if you’re teaching it. The thing is, I think if you want to do anything within the arts, if you want to be a doctor, a dentist or a lawyer or anything that needs formal training, go to university, spend four years studying your craft and get your job, but if you want to do anything in the arts, if you want to be a photographer, a radio DJ, a journalist, a musician, an artist, anything, just start off as young as you can and the experience and the education comes from actually being in the field. So you becoming the best at your job as a radio DJ is not you going to university and telling you how to set up a mic or how to work a desk, it’s you probably coming here at the age of 16 and just watching and studying people, if that makes sense.”

Asked if he had a girlfriend, Ed said, “No. I had a girlfriend for four years from school, up until last year. You can’t focus on your personal life in this business. You can have a healthy balance of friends and family, but as far as keeping a relationship together when you’re, I can understand second or third album I’ll be more free to do it, but I have to commit 110% to this, like literally I haven’t been home, so I would never get to see the girlfriend.”

As for whether jealousy and other girls he’d meet at shows came between them, Ed said, “No, because I’m not even that kind of person. I don’t really put myself out as that kind of person. I guess she found comfort in someone else when I was away. But you know what, I don’t have any qualms against her because she’s been with him a year now, been very happy, and he’s given her the time I can’t give her, so I can’t really complain about that.”

Questioned about how he meets women in his field of work, he admitted, “It’s not something I kind of actively pursue. The last few girls that I’ve been with have been friends of friends. Friends of close friends. School friends, so it’s all been kind of inner circle stuff.”

When asked if he’s smooth with women, Ed confessed, “I am the worst. I’m awful. I’m just awkward. I can’t start off a conversation. I can make friends easily. I can choose a girl and make them my friend easily, but choosing a girl and making them a girlfriend, I’m just very awkward with it.”

Talking about if he’d ever high fived himself after hooking up with a hot girl thanks to his fame, Ed said, “No, because I really don’t do it that much. I know that I should be rock n’ roll. I should be like doing everything that moves. It’s all good though. I’m perfectly happy with that kind of career path, because I know that as soon as everything should fall into place falls into place, I’ll have a lot of space to be open.”

On his hooking up with random girls period, Sheeran confessed, “I did go through that phase. I did alright. I was treating every single girl that I hooked up with like they were my girlfriend, and leading them on a bit too much. I ended up realizing what I kind of wanted was a girlfriend, and that’s where that came from I guess.”