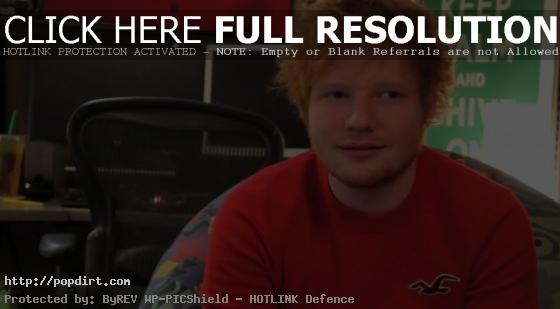 Ed Sheeran spoke with Z100 in Portland, Oregon on October 5th, where the British singer songwriter talked about having a long run of sold-out shows, having a series of small breaks in his career, comparisons to fellow ginger Prince Harry, having a sporadic songwriting process, and being frustrated at chart success because Adele flicks all competitors aside.

As for sold out gigs, including the one that night at the Roseland, he said, “I’m happy that every gig we’ve done for the past 18 months has sold out everywhere, so I’m very happy to be alive right now.”

On his “big break”, Ed said, “I never really got one big break, it was kind of like 2,000 very, very small breaks all added up to one big break. I was constantly just out there gigging and getting in front of the right people at the right time, but the right people don’t necessarily think I’m a very good product that is easy to sell. I had to prove to people that I could sell so I did it independently for a long time and then sold a lot and then

On comparisons to fellow British redhead Prince Harry, he said, “Yeah, there was a newspaper when Harry was in Las Vegas and photographed naked and stuff. There was a big thing in the Daily Mail, there was a picture of Prince Charles and they said, ‘No Harry, we can’t pretend it’s Ed Sheeran.'”

Talking about his songwriting process, Ed said, “It’s very sporadic and there is no set process to it. I could sit down and write. I’ve done that when I’ve written for other people. I’ll sit down with them. with subject matter in mind and a band in mind and written a song and that is for them kind of thing. When you’re gonna play a song for the rest of your life, it has to come from somewhere that you’re not trying to write a hit. You just want to get something out there.”

If he gets tired of singing the same song over and over, Ed said, “It’s weird. I’ve been playing ‘The A Team’ for three years and it became a hit. I’m still not tired of it. I think if a song comes from, I don’t want to say credible place, but if it comes from a heart and soul and it’s a song that really means something to you, rather than like, I love that ‘Call Me Maybe’ tune, but I think I know it hasn’t come from a deep seated emotion in Carly Rae Jepsen. Let’s make a song about partying, which is fair enough.”

On the new British invasion, Ed said, “I don’t know what’s happening over here. Adele just messes up everyone man. Adele is just like, Taylor and One Direction have released their new songs and they’re like #1 or #2 on iTunes, and Adele is just like, ‘Fu** that’, (wipes away) and goes #1. She just doesn’t make it fair for any other artist. We thought ’21’ was #1 for like a year and we thought, ‘Cool, we’re in a time where we can have a top spot now.’ She’s like, ‘No, I’m gonna release a new song’.”